Birds in a changing world 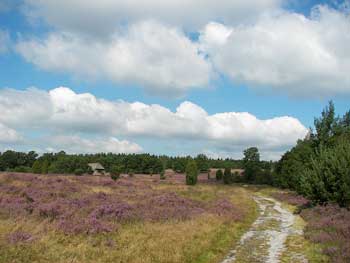 Heathland
© Willow, licensed via Wikimedia
Commons
The Colbitz-Letzlinger Heathland is the largest contiguous heathland in Saxony-Anhalt. Major parts of the heathland area belong to the military training ground "Altmark".

Since the mid-1930s the central part of the Colbitz-Letzlinger Heathland is used as military training ground leading to the development of an extensive and unfragmented heathland today providing suitable habitat for typical heathland species such as Nightjar, Hoopoe, Great Grey Shrike, Woodlark, Red-backed Shrike, Barred Warbler and Tawny Pipit. The area characterised by open landscape habitats covers between 100 and 120 km². Next to the extensive heathland areas very old deciduous woodland can be found especially in the southern part. Black Woodpecker, Grey-headed Woodpecker and Middle-spotted Woodpecker as well as a tree-breeding population of Swifts characterize these woodlands. In contrast the woodlands in the norther part of the area are characterised by pine and birch. Occasionally the Tengmalm′s Owl calls from old pine stands. The forested area of the military training ground comprises about 100 km². As the Colbitz-Letzlinger Heathland supports populations of regional and sometimes national importance for many species listed above, the area has been designted as EU Special Protection Area (SPA) "Colbitz-Letzlinger Heide".

In addition to species-specific surveys carried out during single years, several monitoring plots contributing to the national monitoring of common breeding birds, coordinated by the Federation of German Avifaunists, are surveyed annually since 2005. Moreover, a project focusing on the implementation of conservation measures to support the local Hoopoe population is in place since 2007.

Colbitz-Letzlinger Heathland and the adjacent Colbitzer Lindenwald are also designated as Special Area of Conservation (SAC) under the Habitats Directive. Besides various further animal species about 2,000 species of insects have been recorded. For example important populations of xylobiont beetles such as Great Capricorn Beetle, Hermit Beetle and Stag Beetle can be found. Looking at typical open landscape insects the occurrence of the ground beetle species Calosoma reticulatum (Genetzter Puppenräuber) and the cricket species Gampsocleis glabra (Heideschrecke) have to be emphasized. In Germany both species occur only at two further sites outside Colbitz-Letzlinger Heathland respectively.

The gravel pit at the "Alte Elbe Treuel" is one of the biggest extraction sites along the Elbe river. An oxbow lake cut off from the Elbe river supports Black Tern (on artificial nesting platforms), Bluethroat, Great Reed Warbler and Savi′s Warbler as regularly occurring breeding bird species. The gravel pit itself hosts a big Black-headed Gull colony with up to 1,000 breeding pairs and in recent years up to 5 pairs of Mediterranean Gull nested within the colony. Moreover, the gravel pit supports 40 pairs of Common Tern, Shelduck, Oystercatcher and Little Ringed Plover. During migration time various species of ducks and waders regularly frequent the site. 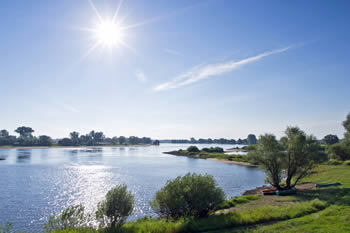 Elbe river
© Christian Fischer, licensed via Wikimedia
Commons
The Elbe river runs through the federal state of Saxony- Anhalt on a length of 302 km. Despite numerous adjustments in the last centuries and decades, the Middle Elbe remains one of the most close-to-nature river sections of the 1,094 km course of the Elbe.

The full length of the river course in Saxony-Anhalt including its neighbouring wetlands is under protection of several European environmental protection legislations (SPA and SAC status). Four SPAs secure ornithological hotspots, which are of tremendous importance for breeding and wintering bird species alike. The Biosphere Reserve Middle Elbe continues in the neighbouring Elbe regions.

Within the Biosphere Reserve Middle Elbe, 310 bird species have been recorded. The excursion will mainly lead into the central region of the reserve, i. e. the SPA "Middle Elbe" including the "Steckby-Lödderitz" forest. This hardwood forest provides protection for high densities of Middle-spotted Woodpecker (500- 550 territories) as well as Black and Red Kite. Osprey and White-tailed Eagle are further frequent breeding birds in this area. Other character species are, amongst others, River Warbler, Red-backed Shrike and Barred Warbler. In annually strongly fluctuating numbers, Corncrake and Spotted Crake occur in the meadows.

White Stork is a character species in the Elbe wetlands. With more than 120 pairs, close to 20 % of the state-wide counted storks occur in the Biosphere Reserve. In the winter half year, large congregations of Whooper Swans (> 1,000 individuals), Tundra Swans (> 200 individuals) and Nordic geese dominate along the river course, oxbow lakes and neighbouring meadows and agricultural areas. Moreover, waders and several species of ducks frequent the area in large numbers when staging during migration.

Centered in the region one finds the statutory bird conservation agency of Saxony-Anhalt. During the excursion participants have the opportunity to learn about the work of the agency, especially their bird monitoring efforts. In the 1970s, the agency started captive breeding and reintroduction of Great Bustards into the wild. The Great Bustard population of the adjacent SPA "Zerbster Land" has vanished during the early 1990s even though the SPA offers suitable habitats. Thus, provided the right methods are taken to lessen intensive land use, a reintroduction of Great Bustards to this area seems possible.

In recent years, several large nature conservation projects were completed in the reserve, mainly focusing on the restoration of a close-to-nature water cycle. During the excursion we will visit a back water reconnected to the river at "Alte Elbe Klieken" as well as the largest dike relocation project in Germany currently implemented close to Lödderitz. 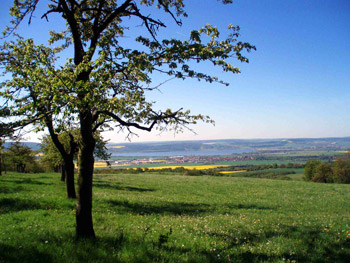 View on Berga and the dam Kelbra
© Hejkal, licensed via Wikimedia
Commons
Between Harz Mountains and Kyffhäuser Mountains one finds the Helme lowlands. Due to the run-of from these mountains, the area had always been highly fl ood-prone. To protect the area, in 1968/69 the water reservoir "Helmestausee" in Kelbra was put into operation. The waterbody together with its surrounding meadows and the southern Karst landscape (xenic and nutrient-poor grasslands) provide important breeding and staging areas for numerous bird species. Significant numbers of Black-necked Grebe, Little Ringed Plover, Snipe, Wheatear, Whinchat, Corncrake and Spotted Crake represent examples of the breeding bird community. The area is also important for migrating birds. Most impressive are up to 40,000 Cranes. Noteworthy staging numbers are also reached by Bean Goose, Great White Egret, Dunlin, Black Tern, Lapwing, Water Pipit and Aquatic Warbler. Besides being important for flood protection and as a recreation area, the catchment lake is listed as SPA in both federal states, Saxony-Anhalt and Th uringia. Right after the first damming, the area developed into an Eldorado for birdwatchers and bird ringers.

Since the early 70s systematic bird ringing has been carried out during autumn migration. Bird-catching facilities are built around the nature conservation station "Numburg" and used for ringing and observations. The excursion offers a tour along the bird-catching facilities, demonstration of characteristic species in hand and explanations concerning the ringing procedures and, of course, offers you opportunities to go birdwatching at the lake yourselves.

The excursion will end with a walk to the "Episodischer See – Bauerngraben". While there will not be many ornithological highlights, you will see karst-like landscapes and subnatural beech-rich Wood Bedstraw/ Sessile Oak/Hornbeam forests at a confined space. The feeder river "Glasebach" creates the so-called "Episodischer See – Bauerngraben". While the feeder river is easily seen, the outflow is not visible as it is below the water surface. Due to the steady but slow outflow and the fluctuating inflow of water, the lake has a very unique dynamic that changes its appearance constantly up to complete disappearance. Thus, depending on the water level, the lake provides habitats for species such as Tufted Duck or Little Ringed Plover. The forest dominated environment supports Wildcat, Garden Dormouse, Midwife Toad and numerous bat species. The area is listed as a Nature Reserve, part of the SAC "Buntsandsandstein- und Gipskarstlandschaft bei Questenberg im Südharz" and also part of the Biosphere Reserve "Karstlandschaft Südharz". The excursion will be led by a knowledgeable employee of the Biosphere Reserve. 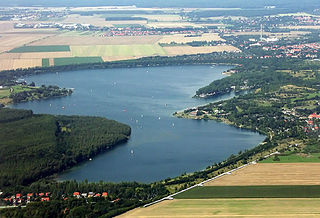 The lake "Kulkwitzer See" in Leipzig, seen to North.
© Martin Geisler, licensed via Wikimedia
Commons
For decades large open-pit brown coal mining sites shaped the region surrounding the city of Leipzig located in the federal state of Saxony. The relevance of fossil energy constantly decreased in recent years initiating a step-wise closure of huge open-pit mining areas south of Leipzig. In frame of the recultivation and restoration of these former brown coal mining sites numerous new water bodies developed and are still developing today, mainly used for touristic purposes and for flood prevention in the Leipzig region.

Already during operation of the mining sites, as well as during the later recultivation phases, the often inaccessible mining sites were refuges for numerous threatened breeding bird species. Especially open and dry landscape specialists found ideal conditions in the post-mining landscapes. Species such as Whinchat, Stonechat, Corn Bunting and Wheatear that nearly disappeared as breeding birds of the agricultural landscape of Saxony, today have their strongholds in post-mining landscapes. Tawny Pipit even exclusively occurs in these landscapes. Crane, Barred Warbler, Wryneck, Bee-eater and Bluethroat show unusually high densities in postmining landscapes. Several species not occurring in Saxony for decades or only sporadically nesting with few breeding pairs, such as Red-necked Grebe, Mediterranean Gull, Common Gull and Common Tern, found new habitats in the post-mining landscapes. As new breeding species Caspian Gull, Yellow-legged Gull, Lesser Black-backed Gull and Great Black-backed Gull as well as Oystercatcher and Shelduck have been recorded. During the migration period sometimes unusually high numbers of divers, Nordic geese and waders use undisturbed areas of these newly formed landscapes as staging sites. Already several times aestivations of Slavonian Grebe, Black-throated Diver and Red-throated Diver have been recorded on the bigger waterbodies which can measure up to nearly 1,000 hectares. Also wintering of Great Northern Diver and White-billed Diver has been recorded.

The first stop of our excursion will be one of the recultivated open-pit mining sites south of Leipzig comprising the huge artificial waterbody "Zwenkauer See" (960 ha). Subsequently we have the opportunity to visit the active open-pit mining site "Schleenhain". The large settling pits of the site which are overgrown with reed and have a semi-natural character represent outstanding breeding and staging habitats. The former mine operator used this semi-natural area for publicity and twice a year allowed interested ornithologists and conservationists to visit this area inside the operational mine. Finally, excursion participants will have the opportunity to witness brown coal mining works using huge mining technology at the brown coal power plant "Lippendorf".

Meeting place for the conference excursions 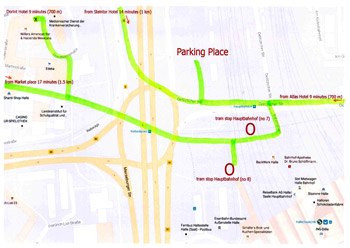 The mid-conference excursions take place on Thursday, 8th September and will last the whole day. Departure: 8:30 am from the parking place Volkmannstraße, near central station. To the left you'll find a way sketch for better orientation.

As short-term changes of excursion plans could be required please pay attention to related announcements or inform yourself at the conference office.

Take advantage of your visit to Germany to attend our post-conference excursion, organised by our experienced partner Bartmeise Reisen.

Destination is the famous island Heligoland (or Helgoland) – located in the southern North Sea. It′s Germany′s only offshore island with large seabird colonies. Among others, about 680 pairs Gannets nest here and are still at their breeding grounds in September. The island is deemed to be one of the Top Birding Hotspots in Europe. The best place in Germany to watch bird migration and to see rare vagrants. 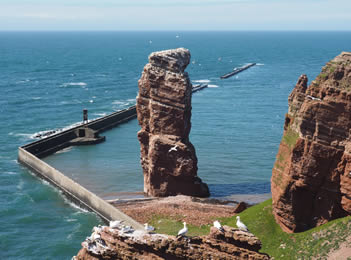